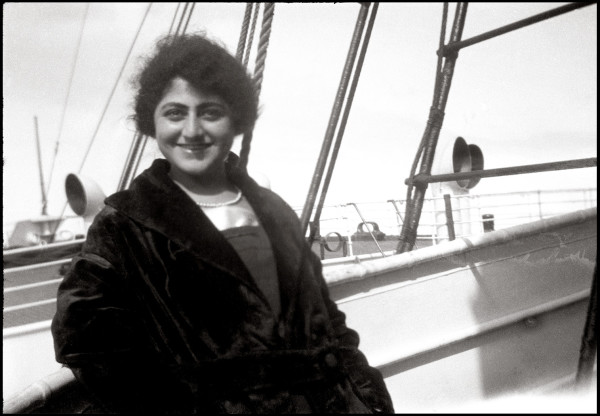 Mary Jorjorian in Love (Part One) is the story of a twenty-year-old who has fallen in love with a family friend while living with her sister and brother-in-law. Set in March 1921, within a small community of Armenian immigrants who are seeking opportunities in Jacksonville, Florida, Mary is the youngest and most American of her group. She is dynamic, incandescent, and romantic, whose life, cultural circumstances, and aspirations make for a magnetic character within her world, but which also set her up for heartbreak, longing, and introspection.

The novel takes place over five short weeks, and yet years, decades, and centuries of personal, family, and ethnic history interplay throughout the narrative. Mary is first-and-foremost a modern progressive, a young Suffragette, who grew up in New York (having arrived with her family from Armenia as a baby in 1901), who attended outstanding public schools, and has come to expect a future that will be more civilized and expansive than that of her older or later-arriving fellow immigrants. She finds a common spirit under the same roof, with her brother-in-law’s friend and her housemate, Daniel Eliseian.

Daniel is a twenty-six-year-old tailor, a talented violinist, and a tender, intelligent, and cultured newcomer who, it would seem, is likely falling in love with Mary. But the world is full of circumstances that sometimes complicate matters.

Populated with a cast of Armenian-Americans in the post-Ottoman era, this is the story of young adults striving to make their way in the world. It is also the story of lovesick dreamers, consoling family members, and consumers of culture; it is about business arrangements, parenting, ethnic networks, regionalism, food, and travel. It is the engagement and dissonance of the old within the new and an exploration of ideals and a domestic drama about limitations. It is about being an Armenian in America in the early 1920s. It is a celebration of Armenian culture and American modernism, acted out in “exotic” Jacksonville, Florida, in 1921. This is the story of Mary Jorjorian, in the month of March … and she is just now falling in love.

Mary Jorjorian in Love, Parts Two, Three, Four, & Five will then pick up Mary’s story in April 1921 and, ultimately, take it to its culmination in April 1924. The four years that are told in this saga-in-the-works are rich with drama, romance, love, heartbreak, determination, and intimate details of time, setting, and circumstance. In its final form, it is anticipated that Mary Jorjorian in Love will be reassembled into a single large novel. To be available where all fine books are sold … sometime around 2031?

Meanwhile, Mary Jorjorian in Love (Part One) is currently available through Blurb. A PDF sample of Chapter One can be downloaded here.

This book is a love letter to my Armenian in-laws, from the husband of one of Mary’s granddaughters. It is also the completion of the first part of my assignment, given to me by my late mother-in-law—Mary’s baby girl—who solemnly, and somewhat urgently, requested that I write this book.

Without giving too much away, Mary died in 1979. I came into the family four years later, in 1983. But in the time since, I’d heard little of Mary among the many family stories. Other characters gained better color over the decades; additionally, most of the stories—as told by parties to the events—were set between the Great Depression and the Funky Seventies. The 1920s? Nobody was still around to tell those stories.

Then we found Mary’s cache of artifacts, discovered in a box she’d packed as an elderly widow … and forgotten to time. All the stories were new, told by Mary herself, in the form of diary entries, correspondence, annotated snapshots, musical records, and assorted keepsakes.

What came through was not merely a breathtakingly lively self-portrait of a very young women—who, otherwise, was only known among the present as, at best, a middle-age mother and, more widely, as an elderly grandmother—but it was also a first-hand view of a world long gone.

Mary’s world was populated by immigrants and refugees from the Ottoman Empire, the diaspora from what would later be described as the Armenian Genocide. These were new Americans, post-“Great War,” in the midst of an economic expansion, in a society that was going through great social, cultural, and technological change. And they were living, as we all do—aside from our dreams and memories—in the present tense.

“This is a novel,” everyone was saying, including myself, upon our finding that cache. And I was in a position to do something about it. I had just published Among the Fourth Graders, and I was commencing work on another book that had been years in the planning. But my mother-in-law, Mary’s baby girl—who had recently faced serious medical setbacks and was in a general geriatric sorting of what is important in life—demanded that I hold off on writing anything else until I wrote her mom’s story … while she was “still alive to read it.”

Inspired, assigned, and guided by the material Mary had left, I then attempted to faithfully re-animate a segment of her world. (I would love to write an epic series covering her whole life, but I knew I had to start with a crucial, manageable, turning point in Mary’s life.) There are a lot of great and useful details in Mary’s diaries and other artifacts. She is very good at listing the titles of movies she takes in, the music she listens to and performs, the books she reads and ideas that interest her, as well as a noting of time, day, month, and year when things happen. But in other respects, she is excruciatingly brief, abbreviated, cryptic, and opaque to someone who wasn’t also an eye-witness. Essentially, Mary is writing notes to herself, or to Daniel, or to her sister. (Her diary entries are often in second-person voice—i.e., “you”—addressing Daniel directly.) And, frequently, in that manner, she references things off-stage, which can be all-but-unknowable to an interloper.

The process, then, involved triangulation of sources, sleuthing, historical & geographical research, conjecture, educated guesses, and ample poetic interpretation. Basically, I unpacked Mary’s small, dense cache of materials and tried to transform it into a three-dimensional, coherent narrative, that moves in natural time. So, while I stayed true to what was there—having Mary provide me the framework of all the plot points, list of characters, and her ever-changing emotional state—in the end, this is my own “make-believe” version of what actually happened.

Is this “true fiction”?

Aside from my specific portrayal Mary, individually, what I am hoping to do in this novel is present a plausible version of her world, generally. This is an American story about Armenians, circa 1920. I wanted to portray Armenian Americans as defined by who they are, not what’s been done to them. The horror and heartache, of what we now call the Armenian Genocide, was certainly much closer then. Obviously. But I get a sense from Mary’s artifacts, and from my own take on human experience generally, that people don’t live history, they live life. The Armenians in Mary’s world are certainly informed by the past—immediate and distant—but mostly they are living their own lives, and living for the future. They are building things—be it careers, families, social networks, friendships, skills, interests, love, and a sense of oneself.